What Do Termites Look Like: 3 Ways to Identify These Dangerous Pests 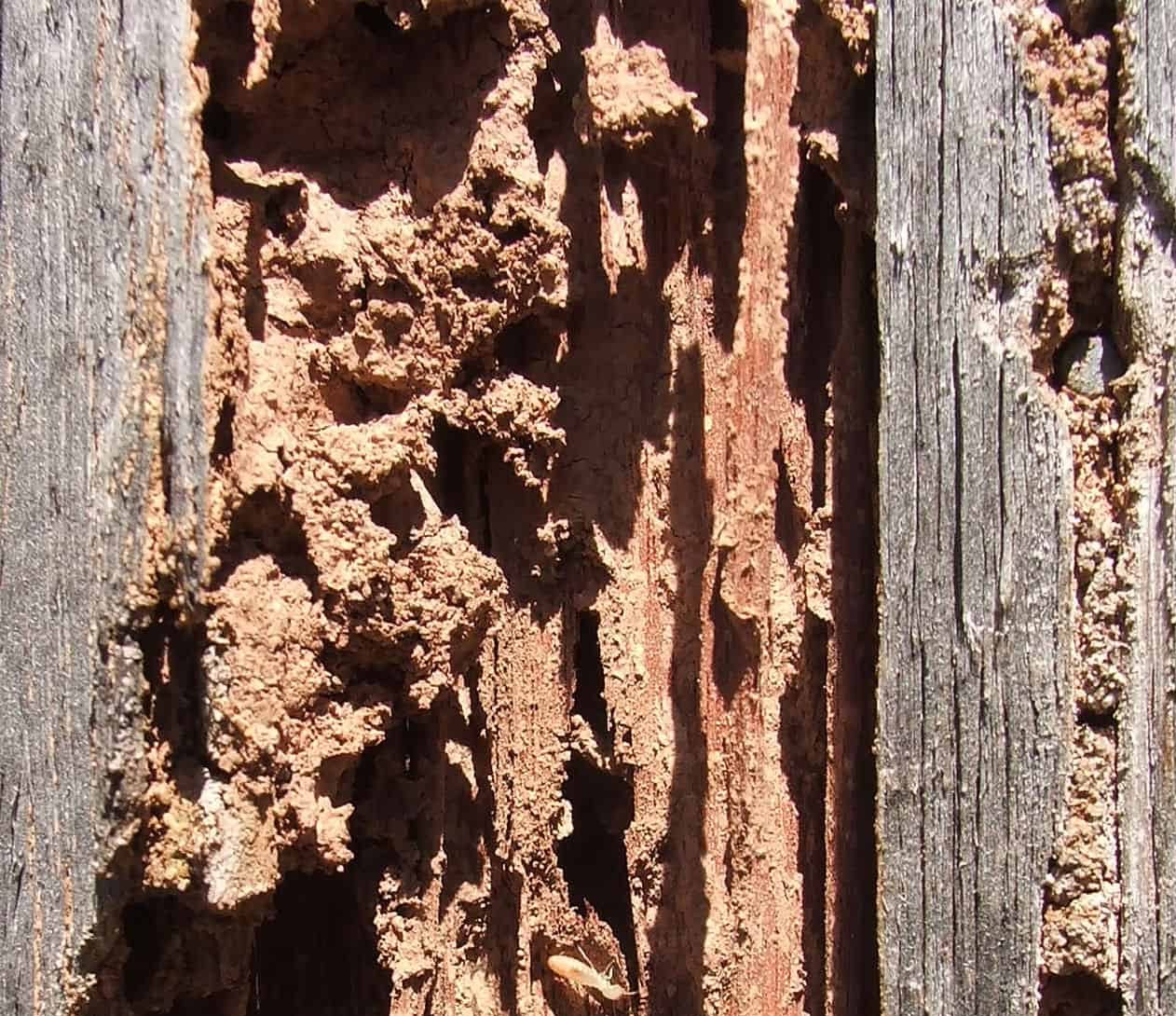 Termites have been chewing away at wood for over 250 million years and thriving long before humans began building homes. But what do termites look like?

There are over 2,200 species of termites, and while most of the termites live in the tropics, some species thrive across the United States. And one of the things our home inspectors look for are termites and other wood boring insects.

If you think there is a termite infestation in your home, the first thing you will need to do is identify termites. In this post, we discuss what do termites look like in detail and tell you how to get rid of them.

What Do Termites Do?

Termites survive by breaking down the cellulose in wood, effectively recycling it, and putting the matter back into the soil. The subterranean termites of the Rhinotermitidae species are known to cause the most termite damage.

In this family of underground-dwelling termites, the western, eastern, and Formosan species tend to eat away at the wood found in homes, starting near the foundation where the wood has softened as a result of water intrusion or being in contact with the moist ground.

Before getting into what do termites look like, it’s worth discerning between the castes of termites. Regardless of the species, termites have three distinct castes within the colony, each with a unique purpose.

The winged termites within the colony are the reproductive termites or “swarming termites.” They fly away from the colony to look for mates and nesting spots. The males and females of this caste pair up and leave the colony together, typically in the rainy season.

When they find a new site, they shed their wings and make a new colony either in the soil (subterranean termites) or nest in the wood (drywood termites). But this caste only takes up a fraction of a colony. The worker termites largely populate the colony, and when you find infested wood, these are the termites you will find.

These workers do not have any eyes or wings but have distinctly soft bodies. Younger workers care for other young termites, while older workers are responsible for creating tunnels, building the nest, and searching for food.

The soldier termites work to keep the colony safe and attack predators when they sense them. The method of attack depends on the species of the termite since the bodies and mandibles vary from species to species. This is the smallest caste of the colony and depends on worker termites for food.

There are thousands of species of termites, all of which have different appearances. However, you can easily identify what do termites look like by cross-checking their general characteristics.

Termites are typically between a quarter and half an inch long. The subterranean termites that thrive in the United States grow to 1/4 inch, but their colonies tend to be larger compared to other termite species.

If you live in an area with a warm, tropical climate, such as California, Hawaii, or Florida, you will likely come across drywood termites. These are typically between 3/8 and 1/2 inches in length.

Formosan termites thrive in southeastern and coastal states such as Hawaii. The colonies of this termite species are massive — larger than the colonies of any other pests in North America — with one colony holding millions of termites. These termites are generally between 1/2 and 3/5 inches long.

It can be easy to mistake termites for ants for someone who hasn’t seen them before. However, some distinctions in the bodies of termites make them easy to identify.

Termites possess soft bodies, but their head is tough and comprises powerful mandibles, which are the appendages on the jaw. The head also has straight antennae with beads attached to them which helps to identify what do termites look like.

The antennae are a key distinction since flying ants have bent antennae. Furthermore, ants have sharp ends at their abdomen with which they defend themselves. In contrast, the ends of termites’ abdomens are blunt. It’s also worth noting that ants have a defined waist between the thorax and abdomen, while termites have a thick body.

The wings of flying ants and termites are very different, with termites having white or transparent wings which are equally sized. Flying ants possess long wings on the front and shorter ones on the back.

The color of a termite can help you identify what do termites look like. All termites do not have the same color, and the color depends on the species and caste. Subterranean worker and soldier termites have cream or pale bodies, with the workers having a larger head which may be orange-amber. On the other hand, reproductive termites have dark bodies.

The drywood species of termites look similar to the subterranean termites, with the worker termites having a whitish color. However, in this species, the soldier termites have a large head that is orange or brown in color. The reproductive termites in this species possess dark brown bodies, amber heads, and grey wings.

Differentiating Between Termites and Ants

Flying ants or winged ants look similar to termites, and it is common for people to confuse the two. The three things you must remember to tell them apart are:

Formosan subterranean termites are 1/2 inch in length and have oval heads that are dark in color. These termites have no eyes and possess a thick waist and a round abdomen. The sturdy jaws enable them to protect their colony.

These termites managed to enter the United States due to marine commerce and are regarded as one of the most damaging termite species in the country. Every year, they cause millions of dollars in structural damage in the southeast and coastal areas – especially here in Southeast Alabama.

This species can reproduce faster than the subterranean termite native to the country. While they do not eat any faster than other termites, the sheer size of the nests makes them more efficient.

While native subterranean termites leave the nest in the daytime, these termites begin their search for a new home at dusk and continue until midnight. Additionally, unlike other termites, the reproductive cycle begins later in the season for these termites, typically occurring between April and June.

Comparing these winged termites to the reproductive termites of the subterranean species, you will notice that Formosan termites are lighter in color, with yellow-brown bodies and smoky wings. They are also larger than native termites.

The swarmers of this family of termites tend to be about 3/8 inches long and have rectangular heads, making them easy to distinguish from other castes and families. The soldiers of this family have brown mandibles, enabling them to protect the colony from predators.

These termites live in dark places with high moisture content, feeding on wood and eating away at the core of beams, leaving only the shell behind. For this reason, these termites are challenging to detect, and the damage is typically already done when homeowners find them.

The Eastern reproductive termites have a unique appearance that makes them easy to tell apart from soldiers and worker termites. They have a pair of equal-length wings that lie flat against the back when not used. Additionally, their bodies are much darker than the other castes, and they have compound eyes.

Eastern termites leave the nest in the day between February and April, ready to establish new colonies. If you find groups of these termites in your home, assume that you have a termite infestation.

These termites live in relatively small colonies made inside dry wood structures, making them a common pest in wood-frame homes. Drywood termites break the wood from inside out, like most termite families, and only leave behind a brittle shell.

These termites do not need access to damp conditions, and this species is generally found in the southern United States. The termites are between 1/4 and 3/8 inches long.

A termite queen looks very different from any other termite — her huge stomach is full of eggs, to the point that it barely looks like an insect. Termite queens have a physogastric stomach, meaning the membrane expands as they grow older and makes them capable of producing more eggs.

The number of eggs produced daily ranges from hundreds to thousands depending on the species, and a termite queen can live between 25 and 50 years.

Termites can severely damage homes undetected since they tend to eat the wood from the inside out. For this reason, homeowners typically find signs of damage but not the bugs themselves until it’s too late.

What are the signs of termites in your home?

If you’re concerned that your home is infested with termites, look for the following signs. We look for these same things when reviewing the exterior structure and grounds section of our home inspection checklist.

How to Prevent, Mitigate, and Control Termite Infestations

If you are based in an area where termite infestations are a known problem, inspecting your home or hiring a professional to inspect it for possible infestation every few months is critical. Detecting an infestation and knowing what do termites look like, is the best way to avoid costly home repairs.

How Do You Kill Termites?

You may treat a termite infestation yourself or contact local pest control professionals. If you do it yourself, you will need to pinpoint the spot where they’re feeding and aggressively apply insecticide. Treating the soil and using baiting stations may also be required to eliminate the insects thriving outside your home.

The EPA recommends making your structure less attractive by keeping soil around your home dry through proper grading and drainage. They also recommend sealing your home well around the foundation and keeping firewood and other wood debris stored away from your home.

But preventing an infestation in the first place is the best way to go and knowing what do termites look like is helpful. There are many ways to do this, including digging trenches and spraying insecticides in them to repel the termites. This approach takes a lot of time and effort but can keep your home safe from termites for up to ten years if the treatment is left undisturbed.

The trenches must be at least eight inches deep and have a space of between eight and ten feet between them. “Prebait” is placed in bait stations, and if termites are found, the bait is changed to poison. The termites take the poison back to the next, and the colony is eliminated.